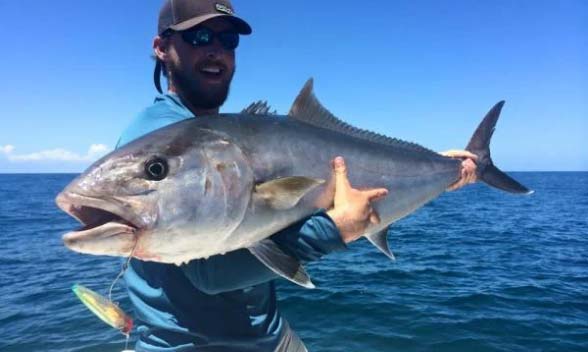 We started in the spring hitting the nearshore wrecks and reefs and we found loads of nice sized gray trout, black sea bass, bluefish and some early flounder and many times, as we were rolling up to the wrecks, the false albacore were putting on a show blitzing on the glass minnows that seek refuge around the structure. Atlantic Bonito fishing was much better south of us out of New River and Bogue inlets. Once the water warmed up, more flounder showed up on the nearshore reefs, and the fishing really heated up! Around Cape Lookout, we found loads of bluefish that crushed topwaters, the albie fishing was great on the East Side, and the sharks provided plenty of pullage! The spanish mackerel started making their first appearances around the Shoals and Shark Island, then tropical storm Ana hit, just as the Cobia started to trickle in.

After the bad weather cleared up and the water cleaned, we had more menhaden than I have ever seen! Almost every morning I caught bait, I could barely bring the net into the boat. No need for lots of tossing... just one throw was more than enough! When the Cobia finally showed up practically overnight, it was hard to choose where to look for them! So many baitballs, so little time! Some people had great luck with them, others didn't. There were also more boats fishing for Cobia this year than ever. I'm hoping that won't be so bad with the looming federal restrictions on the fishery coming. If there is a closure or reduction on harvest in 2016, the catch and release Cobia sight fishing should be FANTASTIC! Less people on the water!

When the spanish mackerel settled in, the fishing for them was awesome. There was a very large size class of them around in late spring and early summer that decreased in size, but increased in numbers as summer went on. When the water was clean and/or there was a light NE wind, it was kick butt fishing! Most times you didn't need to leave the inlet. The bluefish were also thick this year around the Cape and on the shoals. The size was running more like 3-7lbs this year and even some "choppers" around as late as June. Look for birds and find them blitzing, or blind cast to the breakers at Shark Island.... Either one worked! They crushed topwaters all day. Nothing like seeing 100 5lb blues chasing one lure!

At the end of May, the amberjacks hit the nearshore wrecks and we had a blast with them all summer! Any time it was calm enough to venture out there, they were willing and ready to put on an incredible show. Busting flying fish in hungry packs and smashing topwater plugs and ripping drags, they're the best! Most of the time, it required no chum to get them to eat our topwater plugs. Nothing like watching a pack of 50 pound amberjacks chase down a topwater plug! Eventually, we started taking the hooks off, because you get pretty tired after catching these brutes every cast! Some anglers were able to catch all day, and some weren't able to last a few fish! Better hit the gym before you tango with the AJ's...

Topwater red drum fishing was much better around Harkers Island and along the Core and Shackleford banks than it was over in the Morehead City and Atlantic Beach area. We had a lot of fun with them and every now and then, a big speckled trout would show up out of nowhere and crush your topwater. Topwater fishing for red drum aka "redfish" is definitely the most thrilling way to catch them. Speaking of topwater fishing, the topwater striper bite in New Bern was phenomenal this year when the NE wind kept guys from chasing monster drum in the Lower Neuse. I made one trip up there, with my girlfriend and we killed it with no intel whatsoever! We got on google maps and picked a productive shoreline and started working our skitter walks and they put on a show!

The monster adult drum aka "old drum" took a while to show up, but when they showed up this year it was a hoot! We made a good number of trips up there to the Neuse River and had a ball throwing popping corks and soft plastic baits for those beasts! Some days the NE wind made it tough to fish the areas we wanted to, but we found a few hidey holes and found fish busting in shallow water! That's fun to see the explosion a 50 pound red drum makes on the surface!

About the same time the mullet run started back at home (Harkers Island/Cape Lookout), the false albacore started appearing around the Cape and we turned our attention to them fly fishing and using light spin gear was very good in September. October was much more plagued by bad weather, then again in November and December, the fishing was phenomenal. Remember those bluefish that were around in the summer, well they were still here and they had only gotten bigger and more hungry! Almost every time out at the Cape, the shoals were covered with them blitzing under birds, cruising the surface... all out mayhem! We had a late albie season and the great albacore fishing lasted well into early December and came to an abrupt halt when the temperature suddenly fell about two and a half weeks in.

Fall speckled trout fishing was hit or miss, unless you liked catching tons and tons of small ones, then it was awesome! Most people, including me, experienced insane numbers of fish, with the overwhelming majority being 12-14" and not many keepers. Still fun though!

All in all, 2015 was a great year filled with lots of "Tight lines, bent rods and screamin' drags!" We hope to see you in 2016. Call me at 919-218-8451 or email at bountyhunterfishing@gmail.com to book a trip for the Spring/Summer season! It's never too early!

Click on the images below to view a larger display.


We Provide Services to the Following Cities, Towns and Surrounding Regions of NC: