Get to Know About Bounty HunterMeet the Captain Will​​​​ 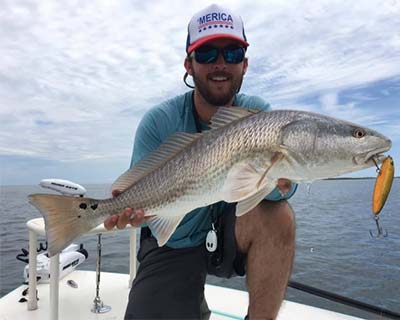 Captain Will started fishing the Harkers Island area when he was a young boy where his family has owned a cottage on Shell Point since the '70s. He started bottom fishing with bait shrimp for croakers, spot and pigfish, but his serious interest in fishing was brought to a whole new level when one day, on vacation in Hilton Head, SC he broke his ankle. His father booked him an inshore fishing charter with a local guide because he felt bad for young Will... That day, Captain Josh Utsey put him on his first-ever red drum and it was all over... Croakers, spot and pigfish would never again be enough!

Will's fishing would evolve when the family got a 21' Sea Hunt and no longer did they have to fish on a ski boat! He chased cobia, tarpon, amberjacks, false albacore, king mackerel, spanish mackerel, bluefish, red drum, speckled trout, and occasionally ventured offshore for mahi and wahoo.

He graduated from Appalachian State University with a BS in Ecology, Environmental and Evolutionary Biology. Soon after graduating, he began working for the Division of Marine Fisheries in Morehead City and moved down to Harkers Island full time. Now living full time at Harkers Island, he got his USCG OUPV 6-pack Captain's License and began fine-tuning his inshore/nearshore fishing skills from his new platform. Later that year, he launched his guiding business and the rest was history...

Captain Will is a true fishing addict and will be on the water whether you book a trip with him or not! That being said, he usually has a very good idea of where the fish are and how they are behaving. He will exhaust every resource and ounce of energy in his body to put you on the fish, because he knows he is truly blessed to have the opportunity to do what he loves every day and he wants to share his experience with YOU! No captain can control the weather and prevailing conditions, but one thing is for sure; Capt. Will works as hard as he possibly can to make his crew members' day on the water an unforgettable experience and loves to share his fishing knowledge!


We Provide Services to the Following Cities, Towns and Surrounding Regions of NC: